What a difference a month makes! TfL contrasting quotes:

“the importance of cycling as a healthy and sustainable transport mode is recognised and as the scheme progresses a cycle strategy will be developed which seeks to improve conditions for cyclists through the wider area and to Oxford Street.”  -TfL October 2017

“We are developing further proposals for changes to the bus network in the Oxford Street area. We will present our proposals in a further consultation in November 2017, and we will not make any decisions until everyone with an interest has had chance to have their say”. – TfL October 2017

“In planning changes to buses using Oxford Street we will seek to minimise the loss of direct connections and amenity for passengers and for the frequency of buses which serve the area to match demand.” – TfL October 2017

“The bus service provision in the Oxford Street area provides links across London to all. Central London is a high demand origin/ destination and as a consequence a significant number of bus services are required to service the area. In considering the average occupancy of London’s central area buses, they are regarded as the most efficient mover of people at surface level and forms an integral part of London’s transport policy”. – TfL October 2017

In November 2017- with no prior proper consultation TfL propose axing or curtailing all but 2 of the bus services accessing Oxford Street, and these 2 will not run along oxford Street but through neighbouring residential streets.

The Wigmore street corridor is to now take all the remaining Oxford Street buses, and many of its taxis Van and commercial traffic. However :

“The existing paving will be replaced as part of the transformation of Oxford Street. The Public Realm master plan is considering the colour and material for paving across the district.” – TfL October 2017

OXFORD STREET FOR EVERYONE

“We are looking now at what can be done to ensure we improve the experience of using Oxford Street for everyone, while still ensuring that people can travel by bus, taxi or cycle easily and conveniently, and that local people are not disturbed or inconvenienced.” TfL October 2017

TfL November 2018- “we propose preventing all traffic from Oxford Street West….cycling will not be allowed”

“Longer walking distances to relocated bus stops and services on Wigmore Street/North Row may disadvantage some of these bus users over the age of 65.” – TfL November 2017

What exactly did the Mayor say about pedestrianising Oxford Street?

THE MAYORS PROMISE in 2016 “Sadiq Khan for London. A Manifesto for all Londonders”

“Travel greener and pedestrianise Oxford Street.” He stated that he would “work with Westminster Council, local businesses, Transport for London and taxis, to pedestrianise Oxford Street. I will start by bringing back car-free days, and possibly weekends, before moving towards full pedestrianisation. Our eventual ambition should be to turn one of the world’s most polluted streets into one of the world’s finest public spaces – a tree-lined avenue from Tottenham Court Road to Marble Arch.”

Westminster City Council have a great many reservation and give every appearance of being pushed reluctantly into this scheme.  Local business, in the main remains ignorant of the whole scheme, the consultation has failed to reach them. Taxi’s- are totally against it but have been sidelined and ignored by the Mayor. There have been no car free days. There have been no car free weekends.  Eventual ambition has become a headline rush- he wants Oxford Street closed to vehicles by November 2018, and the consultation only ends in January 2018.

“Surveys show that many cyclists tend to avoid Oxford Street, and instead use alternative routes, including Wigmore Street (historically part of the London Cycle Network), Brook Street or Grosvenor Street. Only one per cent of the trips made on Oxford Street currently are by bike.” – TfL November

We make it 16% of trips made on Oxford Street, and 2,024 cyclist per day use Oxford Street and 2,237 use Wigmore Street.  Not sure cyclist tend to avoid Oxford Street.  But worth remembering buses on Oxford Street carry 43,000 through passengers a day and whilst there are around 175,000 daily boarders and alighters. Better Oxford Street would like to see proper high quality cycle lane as part of any future scheme but implement on the right streets north and south of Oxford Street but importantly, with the right joined up thinking on off street parking solutions for residents and on street for business. 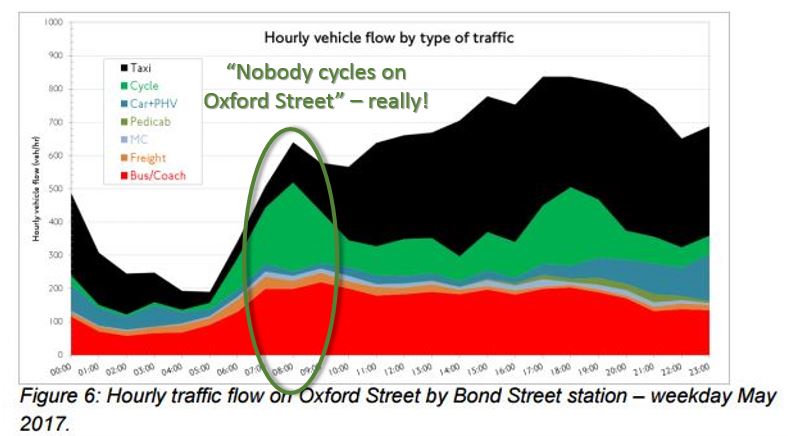 To get the residents onside with the scheme Val Shawcross states “we’ll be investing in new pedestrian crossings, wider pavements and new lighting, ensuring we improve quality of life for everyone.”  Only one small problem Westminster City Council have now stated these improvements are going ahead regardless of the consultation.

“We have met with a large number of businesses in and around the Oxford Street West area, and carried out a number of surveys to understand their servicing and delivery requirements in much greater detail.”

“There are very few shops being serviced from the front via Oxford Street at the moment.”

What are the facts.

41 only have front delivery access to their stores (So 36% of shops on Oxford Street West only have access for loading via the front door so 24 hour closure suits all the retailers!) Of the 90 servicing movements 50 occurred during the day and 40 at night.

7 of these shops get high value goods or cash deliveries!

So when TfL say “very few shops being serviced from the front via Oxford Street at the moment” what they actually mean is 36%.

“Much of stage 1 will be in place by next December, but we want to leave room for evolution through the time stage 1 is in place, to test ideas in response to an increasing understanding of how the changes to vehicular and pedestrian movement and behaviour impact the dynamics of the district: how it looks, feels and functions.” – TfL Factsheet- from booklet Design Principles and concept for the first stage transformation of Oxford Street